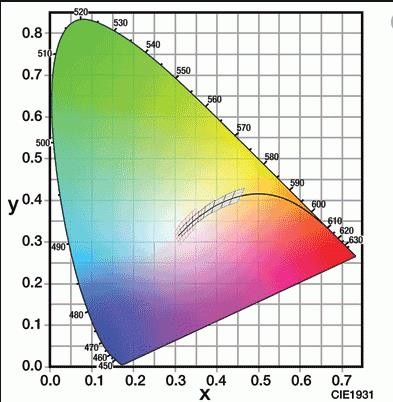 The curve in the middle is called Black Body Locus(BBL). Every white LED can locate a point near the curve which is called LED's chromaticity coordinates. The closer it is to the BBL curve, the closer its light color is to pure white. For example, 2700K white is close to red, so its white is a bit reddish and 6500K white is close to blue, so its white is a bit bluish. Sun is standard black body, so the sunlight is on the BBL undoubtedly.

With the development of white light LED, in order to unify the specification of LED products, ENERGY STAR combines the ANSI C78.377 specification to define a unified BIN, so that users can easily distinguish the color of LED products like 2700K, 3000K, 4000K BINs. However 4000K BIN does not mean the CCT of each LED is exact 4000K, it is usually 4200K or 3800K but it has to be within ANSI 4000K BIN range. The smaller the BIN range and closer to the BBL indicates that the light color consistency of this batch of leds is higher.


For general commerical lighting, ANSI BIN is enough to unify the light color. However, some applications require more accurate light sources, such as a reference or standard light source, then they will need a smaller BIN area like Yuji's BIN :)

What is the small size of the BIN that human eyes cannot distinguish between two white lights?

So next time we are going to talk about the McAdam Experiment where we used to say 3-step or 5-step SDCM.